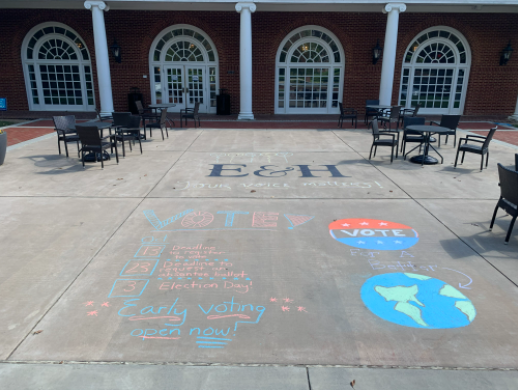 Civic Leader Scholars working on the Get Out the Vote campaign drew informational graphics about voting in front of Van Dyke Hall to promote their campaign.

At a liberal arts school, one might expect to encounter stereotypically artistic students with far-left liberal ideals. What happens to these expectations when that liberal arts school is in a county where the majority of the population has voted Republican in the last five presidential elections?

Zach Cain, a self-described conservative, never expected to feel like a political minority in Southwest Virginia. However, when he arrived at Emory & Henry College in 2019, he found that his conservative beliefs were not shared by all of his peers.

“I find that on campus I have a hard time passing my ideas off to other people, but if I go anywhere off campus then I’m fine,” he said.

In the Princeton Review’s annual Best Colleges rankings of 2019, nine of the top 10 most liberal colleges in the United States were liberal arts colleges. Nine of the most liberal colleges in the rankings were private schools, and none were located in the South. The data from these rankings may seem to suggest that E&H, as a private liberal arts college, is likely to have a mostly liberal student body.

However, E&H is very much located in the South.

Anyone who exits Interstate 81 at Exit 26 will be surrounded by expansive green fields held back by white fences. The train tracks and E&H barn paint the scene of an old Southern-charm film. One might think they’ve stepped onto the set of Fried Green Tomatoes.  Emory, Va. is a Southern town, and the population of the county it resides in, Washington County, is stereotypically conservative.

With some E&H students coming from the conservative surrounding area of Washington County and others coming from more liberal areas, the student body represents varied political opinions. The college hosts a Young Democrats club and a Republican group on campus, but neither has been particularly active in the fall 2020 semester.

“Most of our members are off campus right now. We’re pretty spread thin and not doing much this semester as we’re all at home,” said Joseph Johnson, leader of the E&H Young Democrats club.

The Republican student group has been active in the past, but it is not this semester.

Cain wants to start this group at E&H because he often feels attacked when sharing his conservative opinions in class and on campus.

“We’re a little blue dot in the middle of a red section of the state,” he said. “I feel like those of us that think alike with conservative ideas … should have somewhere to go where we can actively see people who think like us and not have to worry about saying something and having someone fight back.”

E&H sophomore Gloria Tuttle, who aligns herself with conservative views, also expressed a feeling of isolation on campus and an interest in the group. “I feel that our school should have active groups … who also hold the conservative mindset. Our school is big on diversity and inclusivity too. Therefore, it is important that all students at Emory feel heard and supported, rather than discouraged … on the basis of their beliefs,” she said.

Cain has gathered a group of five students who are also interested in this group, but he has neither acquired a faculty advisor nor the college’s approval to start the group on campus. Whether a branch of the conservative group is ever established at Emory & Henry or not, the student desire for the group exemplifies the campus’s political diversity.

As the E&H website states, Civic Leader Scholars is a scholarship program in which students participate in on-going civic engagement projects.

Emy Youmans, a first-year student at Emory & Henry, and a Civic Leader Scholar, said the campaign’s goal is to make sure students have a plan to vote.

“It doesn’t matter what your political beliefs are. We just want people to be registered and to know what they need to bring to vote, how to vote, and to know the deadlines as well,” Youmans said.

The committee is also providing opportunities for students to become more politically active by requesting volunteers to work local polling locations on election day and to help drive students without cars to polling locations.

The Civic Leader Scholars are promoting their campaign with informational signage around campus and by setting up a booth in the Van Dyke dining hall during meals to share information about voting.

Virginia Tech, a large public school in Southwest Virginia, does not have the unique characteristic of being a liberal arts college in a conservative area, but it does serve as an environment to compare E&H’s political climate to.

Grace Shockley, a sophomore at Virginia Tech, finds that her large public school does not make politics as accessible as they seem to be at E&H.

“There are obviously political groups on campus, but nobody is offering to drive other students to polling locations or setting up info booths in the dining hall like what I’ve been told Emory is doing,” she said. “I think it’s just harder for such a large population of students to navigate clubs and get personal like that.”

Amongst the political diversity and activity on the E&H campus, are there enough political activism opportunities for students?

Compared to a less accessible political environment like Shockley feels she has experienced at Virginia Tech, E&H’s available activity may seem adequate. However, students and faculty at E&H express a desire to see more activism on campus.

The students seeking a place to express their conservative opinions are not the only example of this desire. E&H sophomore Rachel Watts would like to see the Young Democrats group become more active, especially in an election year.

“I would like to see more clubs available for students to explore their political beliefs. This election is the first presidential one that a lot of the college students here get to vote in, so it seems like a necessary topic on campus,” Watts said.

Maggie Obermann, the Civic Leader Scholar’s faculty advisor, believes the school provides activism opportunities and would like to see students step up in political activism.

“The student body could improve on making E&H a more politically active campus by reinvigorating groups like the Young Democrats and Republicans, and maybe making an Independent group,” Obermann said.

Obermann strongly expressed that student leadership is essential to political activity on campus.

“There needs to be more student leadership devoted to increasing diverse political interest, dialogue, education, and action on campus,” she said. “This leadership shouldn’t come only from staff or campus offices, but from students stepping up to encourage their peers.”

Youmans, an example of such student leadership, believes that the school and the students can do more. “I definitely think the school should provide more information, or have a page for it or a forum,” she said, speaking of voting information. “I think as soon as our student committee gets our frequently asked questions list down, and our answers, we can provide that as well.”

As the 2020 election approaches, E&H’s McPherson Center and the E&H Student Government Association are offering political activism opportunities through the Civility Campaign.

“The Civility Campaign asks that in however you choose to express what you understand to be good citizenship, please target your opposition at ideas, beliefs, or policies, but not at the personhood of your fellow citizen,” said Dean of Students Ryan Bowyer in an email to all E&H students on Tuesday, Sept. 29.

The Civility Campaign is streaming the three presidential debates for students to watch in the Van Dyke BOV. Moderated discussions are being held immediately following the debates. The first event was held after the first presidential debate on Sept. 29, and the next two will be held on Oct. 15 and Oct. 22 respectively.

The Civility Campaign’s reminder for students to share opposition in a civil way reflects the unique political diversity at E&H. From students interested in Young America’s Foundation to those who want to see the Young Democrats become more active, there is a multitude of political opinions present at the little liberal arts campus in the middle of conservative Southwest Virginia.