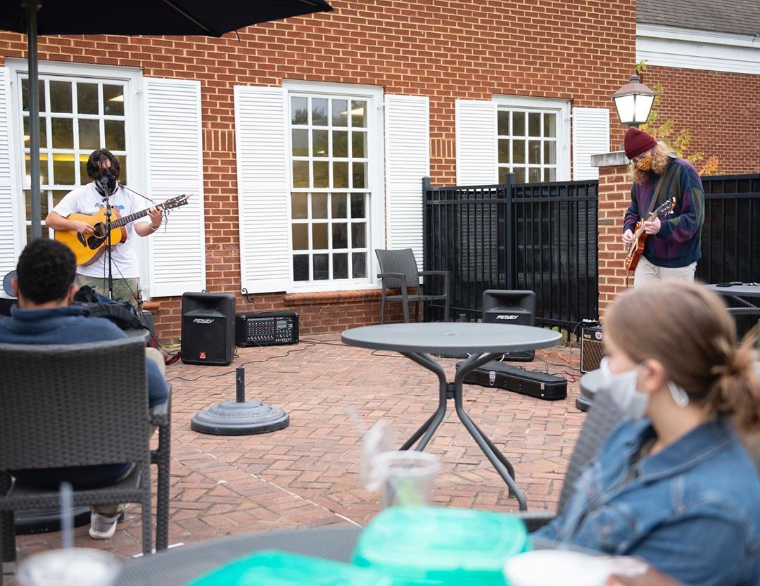 Members of Rosewater perform a socially-distant set for the Emory & Henry College community on the Van Dyke patio; photo courtesy of E&H on Instagram @emoryhenry.

Members of the band Rosewater, composed of Emory & Henry College students Ronald Miller, MacKenzie Hennington, and Orville Peterson, performed surrounded by students, faculty, and staff at the first of an ongoing series of concerts planned for the fall 2020 semester on Oct. 9.

The concert was held on the back patio of the Van Dyke dining hall, and will remain outside for the next two events for maximum safety under COVID-19 protocol. Guests can expect an abundance of trivia questions, prizes, and interactions with the band members. The main event of the first concert began at 5 p.m. and was followed by a mix of cover songs as well as original songs written by Miller, who provides vocals for Rosewater.

“This concert series aims to bring people together,” Miller said. “There is so much division in our world right now and our motto means doing our part to make the world a little more enjoyable … because everyone deserves that.”

“Ron tends to write a lot about everyday joys in life, which I feel helped the first event,” Hennington, who plays guitar for Rosewater, said.

In addition to holding the events outdoors, COVID-19 precautions will be mandatory for attendees.

“Only families and roommates are allowed to sit together and the band members are required to be 10 feet away from each other, and wear masks as well,” Sharon Wright, Interim Chaplain of Spiritual Life, added.

Since E&H only brought back a small number of students for the fall 2020 semester, some view the concert series as a way to meet new people.

“When the semester started there seemed to be a chasm between the first-year students in Elm and Hickory and the limited number of upper-class students who live in the village,” Wright said. “The idea of the concert series being on campus seemed like a way for students to at least see one other.”

There are two more concerts planned, the first of which will be held on Oct. 30 and will be Halloween-themed; guests are encouraged to wear Halloween costumes. The second concert will be on Nov. 6. Both of these events will feature Rosewater.

“I’m sure it gets boring staying at college all day, unable to hang out with friends or go anywhere, so we were happy to help,” Hennington said. “This concert series will hopefully get people back to feeling some sense of normalcy.”