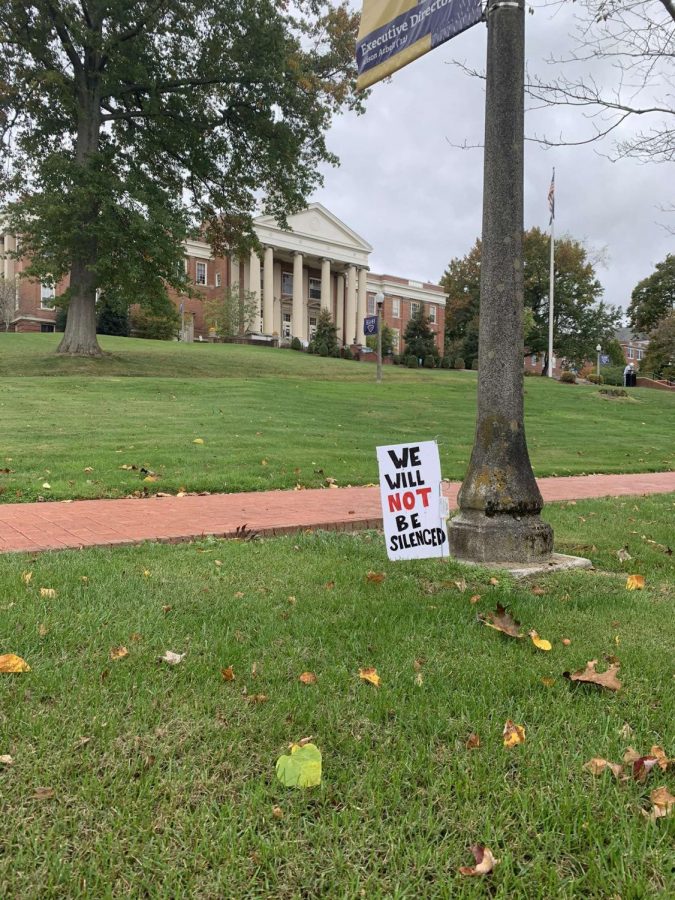 A sign in support of the Black Lives Matter movement and social advocacy, with Wiley Hall in the background, one of many student projects from Bremner's class.

Students in the first-year seminar course Activism in the Arts, taught by Dr. Kelly Bremner, associate professor of theatre and women and gender studies at E&H (also the Chair of the Theatre Department), placed their final social activism art projects in designated areas prior to Thursday morning.

The projects were reported vandalized that afternoon.

“The final assignment in that class is always to create a piece of activism that the students believe would be valuable to the Emory and Henry campus,” Bremner explained. “In one of the groups, tape outlines were placed on the ground with descriptions inside of BIPOC (Black, indigenous and people of color) individuals whose lives were lost as a result of police violence.”

Another group from the class placed signs around campus in support of the Black Lives Matter (BLM) movement, which also showed the names of victims of police violence.

“On Thursday morning, I went to campus to see the projects and they were all there. From there I went to class and about an hour later, I received word from my students that the tape outlines and the signs had been destroyed, ripped up and vandalized,” Bremner recounted.

Interesting to note is that while some projects expressed support of the BLM movement, others focused on mental health awareness.

Only the projects which centered the BLM movement were vandalized.

The E&H community was sent an email from Vice President John Holloway stating that the college administration was informed of the vandalism and that they were prepared to hold those who committed these racist acts accountable.

The email then urged anyone who had further information about this situation to contact Dean Bowyer or The Office of Diversity, Equity, and Inclusion.

Since this email, however, there has been no further word about the issue from the college administration.

“In class on Thursday, many of my students shared how safe Emory & Henry College felt to them. By that afternoon many students, especially BIPOC students, felt actively unsafe,” Bremner stated. “They felt afraid to walk to the cafeteria alone.”

Bremner feels angry that whoever is responsible took a sense of safety away from her students.

“They were cowards who couldn’t handle someone having a different perspective from their own,” she expressed. “This is meant to be a learning environment. No student should be made to feel unsafe while trying to earn an education.”

On Friday, October 16, President John Wells sent a mass email addressing the vandalism with the heading “We Can Do Better.”

“We are a campus that supports racial justice, hospitality and inclusivity. It is on all of us to make it so,” the email read.” “Let’s all commit to doing better and being better citizens. I hope that you will take a while this weekend to consider these actions and how it impacts others in our campus community. We are ALL Emory & Henry and we are stronger together.”