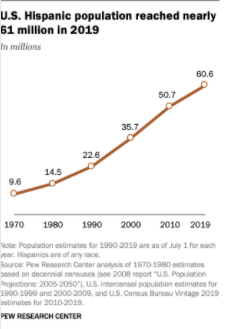 A graphic sourced from the PEW Research Center depicting the growth of the Hispanic/Latinx community within the U.S. in 2019.

The Office of Diversity, Equity & Inclusion (DEI) at Emory & Henry College led a series of events to provide the opportunity to honor the Latinx community during National Latinx Heritage Month, which is celebrated September 15 – October 15.

During these four weeks, the E&H community hosted a variety of events to attend, including a book discussion of “The Alchemist” by Paulo Coelho, a cooking session to make a traditional Latinx dish called Paella, and a discussion session of the film “Roma” with Professor Jenn Krause and Dr. Krystin Krause. The celebration closed with a series of Lyceum lectures hosted by Dr. Gomez-Becerra. All events were held virtually over Zoom.

The Office of DEI believes these events hold special opportunities for community members of all backgrounds.

The students weren’t the only ones learning, however.

“One thing we learned is that although this month has traditionally been referred to as ‘Hispanic Heritage Month,’ we conducted research that indicated that ‘Latinx Heritage Month’ is more inclusive,” Carlee Blaylock, the Special Projects Coordinator for the Office of DEI, said.

According to the PEW Research Center, the U.S. Latinx population reached 60.6 million or 18%  in 2019, making the Latinx community one of the nation’s fastest-growing groups. The Office of DEI recognizes similar diversity on the E&H campuses, and it also realizes that these celebratory events alone are not always enough to fully educate the community about Latinx culture and heritage.

“I believe it goes without saying that one month is simply not enough time to educate oneself about an entire diverse population,” Blaylock said. “We want to make sure that we are doing enough to support the Latinx students and community in our area.”

Blaylock also noted a particular shortcoming within the Office of DEI.

“We are aware that we do not have a Latinx person in our department, so we are educating ourselves about the needs of this community. We welcome any discussion and input from our Latinx students & community members,” Blaylock stated.

Due to E&H’s precautions against COVID-19, community events have taken on a different appearance.

“We would have liked to have had students, faculty and staff together to celebrate and share ethnic customs and food, and to hear what went well and what we could improve on in the future,” Bowers said.

The Office of DEI also believes that more work must still be done.

“While we have only scratched the surface, I know we have learned a lot about Latinx history and culture this month. We have made some meaningful connections with fellow colleagues and students that will allow us to have deeper conversations, and we will continue to educate ourselves as we go forward with this work,” Blaylock said.

The Office of DEI welcomes communication with Latinx members of the E&H community, and beyond.

“We would like students to know that the Office of DEI is dedicated to educating ourselves, our campus and our community about Latinx culture and the unique needs of the Latinx community,” Blaylock concluded.