Matthews and Carriger Halls: Under Renovation for New School of Business 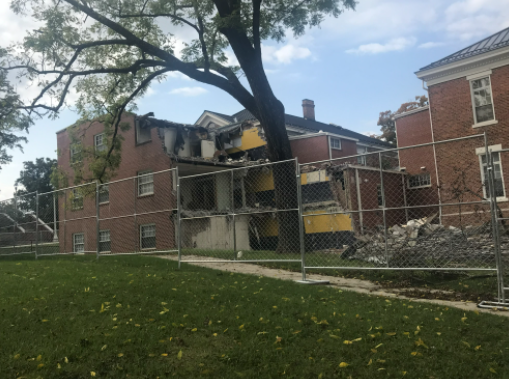 Matthews Hall at Emory & Henry College, a building that has stood since 1953, has been demolished to make way for the new School of Business.

Two historic buildings on Emory & Henry College’s main campus, Carriger and Matthews Halls, are the targets of the project for the new School of Business.

Carriger was built between 1904 and 1908, and Matthews in 1953. Despite being parts of the campus for years, Dr. Michael Puglisi, the provost of E&H, said that both buildings had been vacant for some time. According to Puglisi, the vacancy makes the buildings an ideal location for the School of Business once renovations are complete. The renovations include tearing down one hall and fixing the structural integrity of another.

Matthews Hall, in particular, was so damaged that the college felt it necessary to demolish.

“Matthews was transformed into student organization office space for a time,” Puglisi said. “And it has not been a desirable location for some time.”

Carriger, on the other hand, is salvageable, even though there were structural problems that needed to be addressed.

“There had been roof leaks that caused extensive water damage in Carriger, which required that the building would have to be repurposed, no longer needed as a residence hall,” Puglisi said. “There had been various suggestions for Carriger before the opportunity of the School of Business arose.”

Being such an old building, Carriger holds important historical value for E&H, and Puglisi said that the School of Business is honored to use it for their operations.

“It is an historic structure on our campus, and we are thrilled that it will be the home for our new initiative and a showpiece for the College,” he said.

As far as funding for the project, Puglisi stated that all of the money was raised from philanthropy projects specifically for the construction of the new School of Business.

Puglisi explained that the renovations were already planned before the COVID-19 pandemic caused major changes to housing at E&H.

“The preliminary plans and the philanthropic effort were already underway before the decision was made to bring students back to campus,” he said.

Both halls are currently undergoing the renovations; however, Puglisi could not share an expected date for when the project would be completed.

“The exact plans for the renovation are still under development, so the contract cannot yet state a completion date for the project,” he said.

While Matthews Hall has already been demolished, and Carriger Hall is undergoing major changes, Puglisi has hopes that the opportunities provided by the new School of Business will be well worth it.

“The creation of the School of Business and the hiring of Dr. Tracy are exciting developments for Emory & Henry, as we look to the vibrant future of the College,” he said.