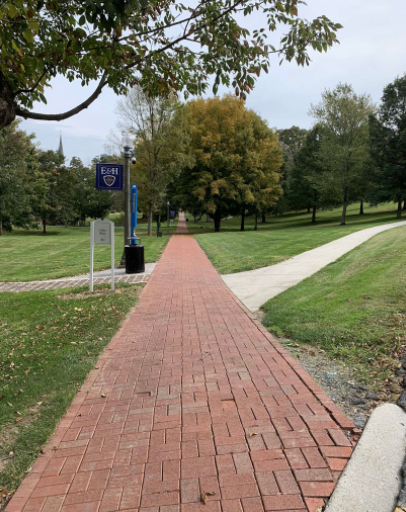 The footpaths at Emory & Henry are barren as students continue online classes from their dorms and the college enforces COVID-19 policies through the second seven weeks.

As more students moved into their dorms for the start of the second seven-week session, Emory & Henry College students received an email stating that another student or faculty member had tested positive for COVID-19, bringing up questions of potential changes in the college’s protocols and plans for the next semester.

Dr. Matthew Frederick, Associate Provost and Director of Bands, said that E&H is keeping the same protocols from the first seven weeks in place for this second session as more students come back to campus, and that nothing new has been added; “Everything that was in place is continuing to be in place, with, hopefully, additional monitoring on top of it,” he said.

Students who moved back to campus and those already on campus at the start of the semester have been less than thrilled with the mask requirements and other safety measures posed by the college, according to Frederick.

“This is one of those situations where there just isn’t any wiggle room with the rules,” he said.

Susan Stanley, Director of Health Services, agreed with this statement.

“When mitigation measures are not followed diligently in all places, virus spread increases rapidly,” she said.

Stanley said, “Differentiating between seasonal influenza and COVID-19 based on symptoms alone is impossible since many of the symptoms are the same.” That being said, the Health Center is currently offering free seasonal flu vaccines to students by appointment.

The college’s COVID-19 plans mirror rules set out by the state, meaning that there are only so many options available if the college is to remain open with students on campus.

That being said, E&H has had only eight confirmed cases of COVID-19 to date: five at the main campus and three at the Marion campus. Five of the total cases are currently active with one new case having been added within the last 48 hours.

“I think the very few cases that we have, versus what other schools have, bears witness to some very positive decisions that we made,” Frederick said.

In the event that students do need to be quarantined, Frederick stated that the college has more than enough rooms set aside to house isolated students—more than the minimum percentage required by the state.

“I think we have as nice of a quarantine experience as we can possibly have,” he said.

With not so great stories of quarantining coming out from around the country, Frederick noted that he is very confident in E&H’s current quarantine plan. Certain dorm rooms have been set aside for that specific use, students there have their meals delivered to them, and they are allowed outside of the rooms to exercise, if they so desire.

As for what the spring semester will hold, Frederick said that the current plan is still to have a regular 14 week semester with the full 925 student body back on campus.

He recognizes that some classes would still have to be offered with online and remote options in order to safely accommodate so many. Additionally, he stated that COVID-19 trends and cases could decrease, and the spring semester could go perfectly, or everything could implode and get worse in a flash.

“We just have to be nimble, and, with an institution of our size, we actually have the ability to be much more nimble than a large 20–40,000 student campus,” Frederick explained.

The college administration has also considered cutting spring break from next semester’s calendar like other large universities, such as the University of Tennessee and Florida State University already have.

“We want there to be opportunities for students to get a little bit of downtime, of course, but we don’t want to encourage a potential super-spreader event,” Frederick clarified.

Frederick also notes that this is difficult, however, as the college is not preventing students from going home over the weekends. “We want people to make smart and wise decisions.”