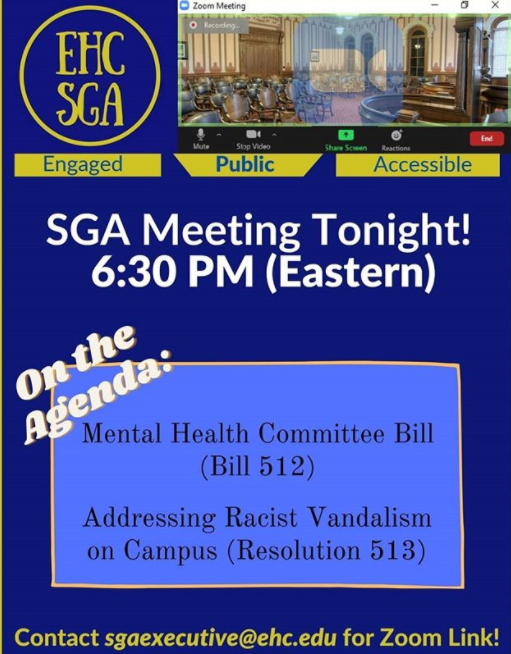 A virtual flyer announcing the most recent meeting of the Emory & Henry College Student Government Association; courtesy of the E&H SGA on Instagram, @ehc_sga. For future meeting agendas and links, information can be found there.

In full, the proposal states: “This bill seeks to form a committee of senators that are interested in ensuring that students have access to high quality mental health support and services, and that they feel comfortable utilizing the resources made available to them. This bill also seeks to diversify the providers of mental health services on campus.”

With a majority vote, the bill was passed and will be put into effect immediately.

The new committee will consist of student senators who will communicate with the E&H administration regarding mental health resources on campus.

The SGA members present  noted the lack of a strong response from the E&H administration with concern.

In full, resolution 513 states: “The Student Government Association of Emory & Henry College condemns any act of hate that occurs on this campus and further condemns the perpetrators of this specific act of hate, calls upon the administration to partner with the SGA on the creation of a Truth and Justice Commission to investigate ways in which our campus can combat hate and declares that that commission should include faculty and administration figures, but be lead first and foremost by students.”

With a majority vote, the resolution was passed.

This was a non-binding resolution due to the matter being handled by another jurisdiction. If the E&H administration chooses to act, they will form a partnership with the SGA. Then, a new bill would be enacted to create the commission.