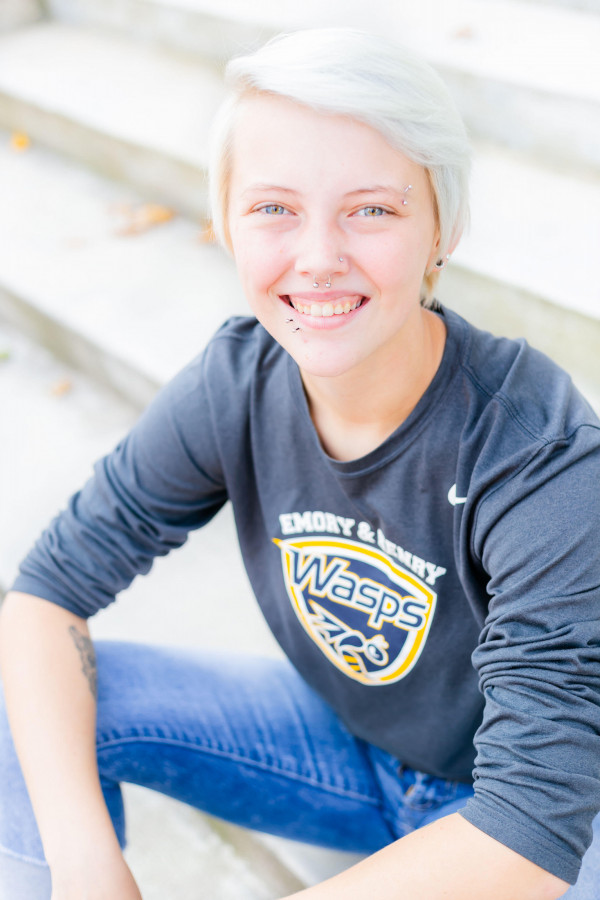 Photo of C.J. Miller, the art student being spotlighted this week.

The COVID-19 pandemic created many challenges for college education, and art students are among some of the most affected by these changes. However, nothing stops C.J. Miller from pursuing their passion for technical theater.

Miller, a junior at Emory & Henry College, is currently majoring in Theatrical Design and Production, a program that has faced significant challenges due to the shift to a mostly remote fall semester.

“It’s hard to teach theater without being in front of a person … especially for technical theater,” Miller said. “Technical theater is practical and hands on … there’s no real way to teach it online.”

Luckily, Miller has been able to take many classes on campus here at Emory & Henry.

“Theater classes specific to my major are in person,” they said. “It’s been good to be on campus because I can apply what I’m learning to real life.”

Although being on campus has allowed them to maintain a normal sort of routine, Miller also talked about the many changes in their classes due to COVID-19.

“There’s obviously a lot more cleaning involved with the projects that have been going on. We have to wipe down props after every run, we’re taking hourly breaks to go wash our hands, we’re sanitizing our hands before we touch any of the equipment and after, and we’re wiping down the equipment every night,” they said.

In addition to safety precautions, the design and technical work that Miller has been doing has changed drastically this semester. Since the theater productions can not have audiences in person, the department had to adapt.

“Before all of this, film and theater were two completely separate entities. I never in my life thought I’d be learning how to edit or how green screens work … I never thought I would learn those skills,” they said. “There’s a lot of new, uncharted territory for theater majors right now.”

Though it’s been challenging, Miller repeatedly expressed that those in charge of the Theatrical Design and Production department have been helping every step of the way.

“The head of design and production is just amazing, and the technical director of the MCA functions and helps the theater department as well, so both of them are really great about helping us figure out everything, and then figuring out everything themselves as well.”

Many people may see the final production that Miller works on and not be aware of all the time and effort that has gone into it, but according to them, that isn’t anything new.

“It’s a whole other world behind the scenes that nobody really talks about or knows about. There are some people who are just like, ‘that’s a nice set!’ but you don’t really think about … somebody built that. Somebody supervised the building of that. Somebody designed that from nothing,” they said.

Miller has stayed busy. The theater department is currently working on eight different productions: a series of works centered around Appalachia during the pandemic entitled “Outbreak.”

“We just got done recording the first piece, so we’re moving along steadily. We’re in rehearsals for three pieces right now … this semester we figured shorter plays would be better to help incorporate more actors who may be online or may be here.”