Phineas and Ferb The Movie: Candace Against the Universe Review 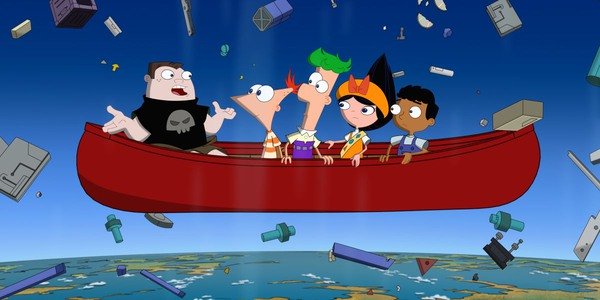 Buford, Phineas. Ferb, Isabella, and Baljeet are in the middle of a life or death situation determining what to do.

On June 12, 2015, our one hundred and four days of summer vacation with Phineas and Ferb came to an end, but five years later, we are able to take an adventure with the beloved characters one last time. After a long seven months of quarantine, an opportunity to relive our childhood reappeared with the release of a new Phineas and Ferb movie.

On August 28, 2020, “Phineas and Ferb the Movie: Candace Against the Universe” was released on Disney+, a streaming platform that has content from all the Disney franchises. Instead of the film being centered around Phineas and Ferb’s creative inventions, it tells the story of how Candace gets kidnapped and how her brothers have to travel the universe in an attempt to save their sister. Phineas, Ferb, and their ragtag team of friends band together to save Candace before it is too late.

The movie has some predictable moments, but other moments maintained the element of surprise. However, as one might expect from a family friendly movie, the film is somewhat childish. While the movie did not bring about the same feelings watching it as a child might have, it still felt great to bask in my childhood glory. The only part of the movie that I was not a big fan of was the musical selection. Phineas and Ferb is known for its great song choices, but I felt like the music choices did not live up to the previous standard.
One of the best parts about the movie is the fact that all of the characters are voiced by their original actors. Hearing those familiar voices and knowing that the actors are still dedicated to the show really increases the nostalgia of the film.

While at times the sequel does not have the same feeling as the original, I still enjoyed this film. Overall, I recommend this movie for anyone who is looking for some action, music, and a momentary relapse back into their childhood.