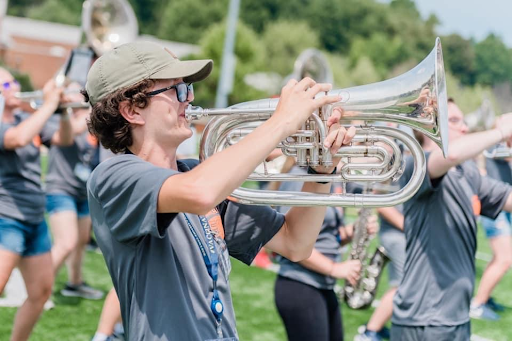 “Music has affected my life in every way. It is something that is a relief for me that I normally do not get. Music is the thing that takes all of my stress away.”

Alec Roberts, a junior music education major at E&H, is excited to be back on campus playing his euphonium with the Emory & Henry Marching Band after a year of quarantine and playing restrictions. For Roberts, music is his version of therapy.

The marching band is currently immersed in marching season, beginning to work on concert band material, and planning its next big international trip. While all of this work is exciting, Roberts is most excited to have a full marching season, unlike the previous year due to COVID, and to make music with other people in the band.

Roberts has always had a musical side to him.

“My family was all musical. My sister and brother were both in the band, so I thought it was cool so I joined,” he said.

After graduating as a marching band member from Chilhowie High School, just down the road from E&H, Roberts was recruited to the E&H Marching Band. Roberts says the band is a big part of what brought him to E&H. “My sophomore year, Dr. Frederick came up to me and talked to me about joining the band and that is ultimately how I ended up at Emory.”

Matthew Fredrick, director of bands at E&H, is glad to have Roberts in the program.

“Alec is a very gifted and talented musician,” Frederick said. “He brings a high level of performance ability to whatever ensemble that he is a part of. He is the type of player that leads by example and always sets a very high standard for his fellow musicians. He is also a great person and is a lot of fun to be around.”

Alongside the E&H band, being a brother in the fraternity Theta Chi Epsilon is important to Roberts’ experience at E&H.

“That is super great because we get to do a lot of services for the community and I love giving back,” Roberts said.

Roberts’ long-term goal is to be a music educator for elementary school through high school students. He also wants to proficiently play the euphonium, piano, and guitar.