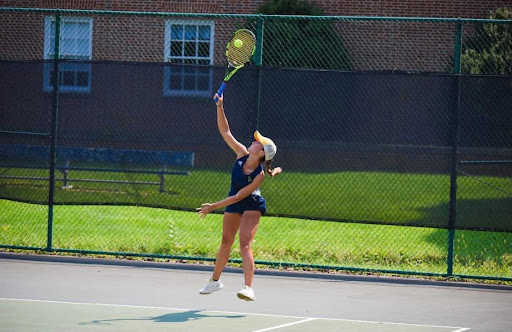 Holt is a third-year tennis player who has experienced playing as both a DII and DIII player at E&H. She shares the excitement and challenges this change brings to her team.

Payton Holt, a junior on the E&H women’s tennis team, shares her excitement about the upcoming schedule and discusses changes the team faces in her third season with the Wasps.

With her third season approaching, Holt says, “I am most excited about playing against new schools this season. Moving out of the Old Dominion Athletic Conference, and now into the Southern Athletic Conference, it allows us a little more freedom during this transition phase so it has been very cool to travel to schools that I had never been to before and see new competition.”

The women’s tennis team continues to have regular practices as they prepare for their new upcoming schedule consisting of Division III and Division II teams.

“I definitely think it is taking some adjustment for those of us who are familiar with the DIII format to adjust to DII rules,” Holt said. This year we have five freshmen, so they really have not yet been exposed to how we have played in the past, so it is new for all of us.”

Since Holt was a kid, she dreamed about playing at a collegiate level for the sport that she loves.

Holt says, “Growing up, my goal was always to play college tennis. Before touring E&H, I toured many SAC schools, but I really enjoyed the DIII format,which was one of the contributing factors as to why I picked this institution. In addition to having the opportunity to be coached by the great Coach Christine Nidiffer!”

Holt is also proud of her accomplishments outside of tennis during her third year at E&H.

“I am a part of many community organizations at Emory & Henry. I am a Community Advisor for Housing & Residence Life, Assistant to the Director of Campus Recreation, member of Emory’s Activity Board, Civic Leader Scholars, and PreHealth Club. I am also a member of both the Intramural Board and Club Sports Boards,” said Holt.

Holt shared that she is excited for the season to take off after recently playing in the team’s first match of the year. Holt said, “Our first match was Sep. 12. It was a very successful first match, sweeping Guilford on every court, so an awesome start to the fall season. We have two matches left, so I am excited to see how we compete against these D2 programs.”

The upcoming matches for the women’s tennis team are on Oct. 23 against King University and Oct. 24 against Johnson & Wales.