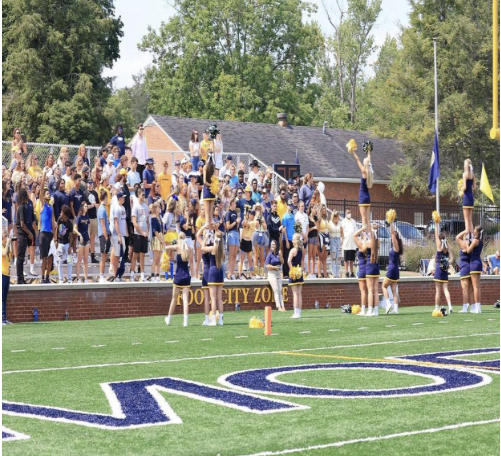 E&H athletics and the SGA worked together to install the new student section, "The Swarm," in the Fred Selfe Stadium for the fall 2021 football season.

Guest Contributor, Nathanial Hupp
“The Swarm,” a new student section, has been installed behind the Food City endzone at Fred Selfe Stadium.
In anticipation of bigger crowds for the first full-capacity football season in nearly two years, the E&H athletics department and Student Government Association worked together to fund the addition of extra bleachers specifically for students for the fall 2021 football season. E&H students filled the new section for the first time as the football team welcomed Bluefield College into Fred Selfe Stadium on Saturday, September 11.
Starting quarterback for the Wasps, junior Kyle Short, believes that the addition of the student section is going to make a difference when it comes to home games.
“They brought out great energy and we could hear them throughout the entire game,” Short said. “It was especially cool when our offense was driving into that endzone with the student section behind it, it really turned my adrenaline up.”
Kiley McGuinness, a student who sat in the Student Swarm, also found the student section to be a positive addition to the game’s atmosphere that allowed students to show their united school spirit and root on the football team. “The players on the field can see and hear their friends cheer them on. … And the players reciprocated their support for us,” she said