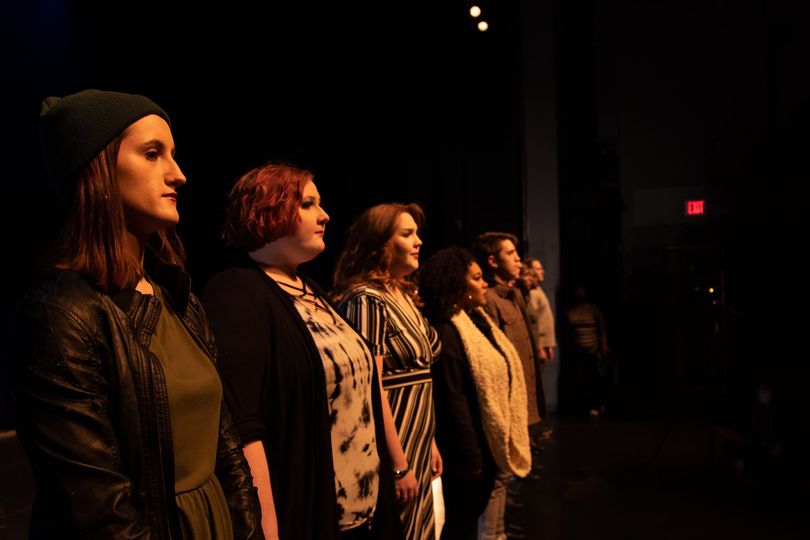 A cast photo from "It's All Relative," one of the final productions of the Spring Semester for the E&H Theatre Department.

The musical was a montage of “unique lives all while intermingling with others around” said Lanier, each story is relatable to people in the audience and “the characters interact throughout the show as people do by passing into various scenes of life.”

Lanier said “We knew this year would look different from our standard musical and we wanted to use this opportunity to get creative with the restrictions rather than restricting the theatre experience.”

The story was composed around the music from Joey Contreras and Julian Velard. Lanier and Kimbrell created characters and intertwined their experiences based on the content of the songs.

Lanier choreographed the show alongside directing it, which was her first time solo directing.
She said “Choreographing and directing didn’t feel too terribly different for me as they both require paying attention to what story is being told.”

Although the cast and staff weren’t able to host a typical production because of COVID, they were still able to come together as a community to do something that they love for the entertainment of others.

“I don’t think my experience would have been as positive if it weren’t for the amazing people surrounding me in this process. Zacchaeus and Kevin (Dudley) were very easy to work with, and we all had a great time playing with what the other person was bringing to the table. The students were also out of this world in terms of kindness to me, each other, and the whole process. They trusted me and I trusted them, and together we created something. The show would not have been what it was without every person doing what they did. That’s the beauty of theatre, it’s a community effort” said Lanier.

Grant Myers said “Even though there wasn’t a live audience it still felt like a regular performance, there was still a community that came around that whole process.”

The filming of the show was the first time in almost over a year since most of the cast was able to be on stage and perform without a mask.

“It was very different having to wear masks during rehearsals but it was a lot of fun. It was one of the most fun rehearsal processes I had here. We had a wonderful cast, we got along very well. We all had a really fun time getting to become more of a family. It felt like that kind of rehearsal process that I liked being in.” Said Dodge Wolfe

The show will be available for viewing on Youtube until Friday, April 23.