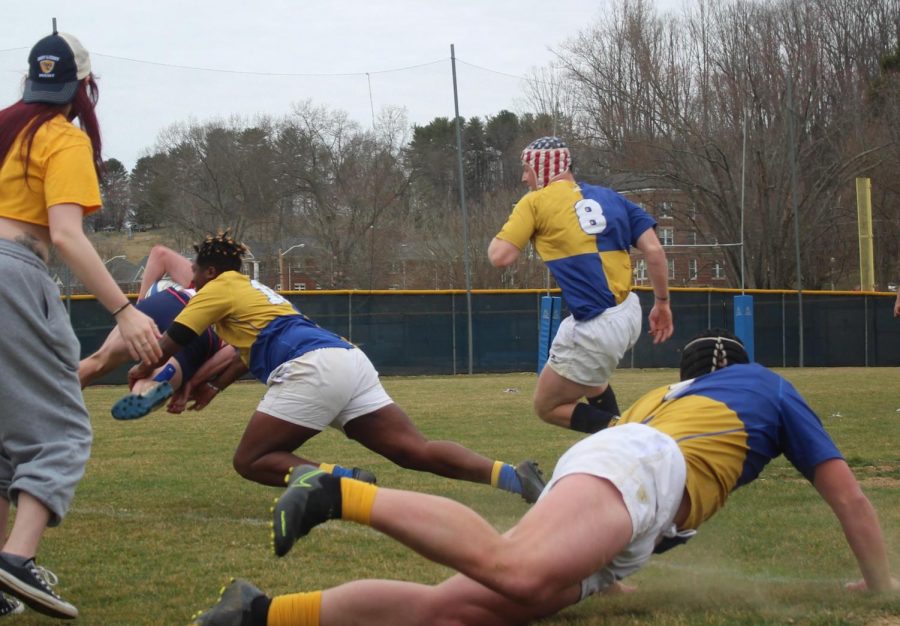 Hamilton (#10) tackling an opposing player during a game

Eilijua Hamilton, a junior at Emory & Henry College, found a passion for rugby in high school and now plays on the E&H team that he helped found.

When he separated his shoulder during a middle school football game, Hamilton did not think he was going to play another contact sport for the rest of his athletic career. However, he was invited to play on the rugby team in high school. Upon discovering rugby, Hamilton realized that there was something special about the sport. While he had played numerous sports in the past, rugby held something different for him.

“We ended up practicing in the gravel lot, and it was different. It was really different, but I felt like I could make an impact in the sport,” said Hamilton, describing his first rugby practice.

Hamilton described the rugby community as an extremely accepting environment where “nobody is left out.”

“I’ve been a part of this community for about eight and half, going on nine years this summer, and it’s probably the best decision I’ve ever made in my life,” he said, emphasizing his love for the sport and his team.

While Hamilton became captain of the rugby team, this year, he still says that one of his favorite parts of playing for E&H is the supporters.

“Almost everybody in the crowd doesn’t know what’s going on… It’s the cutest thing ever. I love the people who come out and watch our team and just want to be a part of the community,” he said.

When COVID-19 struck the Emory campus in the spring of 2020, the rugby community was put on pause, but Hamilton said that the team has been able to stay active despite the pandemic. None of his players have contracted the virus yet, so they have been able to hold semi-regular practices, and the team recently held their first game, winning against the Radford Highlanders, 70-18.

Hamilton and his team will continue playing with passion this Saturday, Mar. 20, in an away match against Johnson City.