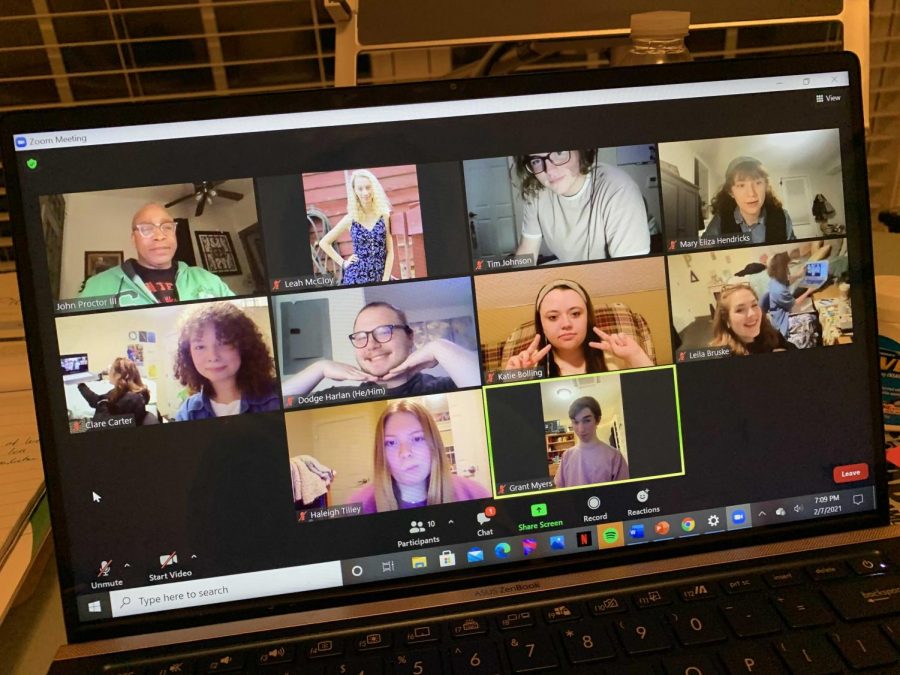 A photo from the Midsummer Night's Dream rehearsal, which is being held virtually due to COVID-19.

Guest Contributor, Veronica Garrou
Emory and Henry’s theatre department is performing William Shakespeare’s “Midsummer Night’s Dream.” The cast and crew have adapted in new ways in order to adhere to COVID-19 guidelines and still bring their performance to the Emory and Henry campus.
Rehearsals are largely being run virtually on Zoom. This has allowed for director Dr. John Ray Proctor of Tulane University to work from New Orleans.
E&H sophomore Katie Bowling, performing as Snout and Mustardseed, said “I am really grateful that Zoom has allowed us to work with our super talented guest director, Dr. John Ray Proctor from Tulane University. It’s always so helpful to get an outside perspective on how we do things.”
The director will be flown out at the time of filming in order to block scenes. However, due to the distance and time difference, much of pre production has fallen onto Stage Manager and E&H student Clare Carter. Her role has been to schedule rehearsals, take notes for actors, and prepare actors for rehearsals.
Actor Dodge Harlan, performing as both Flute and Moth, said “My acting process is quite different now. For one, I sat at a computer instead of walking around a rehearsal studio for three hours, so that took a little getting used to, but I think that really helps with this production in general, given that it’s a Shakespeare play. We have plenty of time to work on our acting and our motivation behind our words, that when we put it on stage, it’ll start to feel like second nature.”
In contrast to Harlan’s comment, Bowling said, “It’s been an adjustment getting used to rehearsing through Zoom. It’s hard to receive direction about something you’re supposed to do on stage–like, walk right, walk to the left–and not be able to physically be on stage to do or see it.”
“I’m most excited for people to see the crazy antics that ensue. This production of A Midsummer Night’s Dream isn’t like others that people would have seen. We’ve modernized it and truly made it our own, by the little things that each cast member brings to the table,” Harlan said, describing changes made to the production. Harlan described the show in one word: “kooky”.
Bowling urges fellow students to “please watch the show and support theaters during this time!” “Not only have me and my fellow students been working hard, but all the faculty have put so much effort into ensuring that we still have a way to do theater during the pandemic,” she said.
The play is scheduled to be filmed and uploaded to Youtube in early April. This release could change depending on circumstances as practices continue under COVID-19 restrictions.