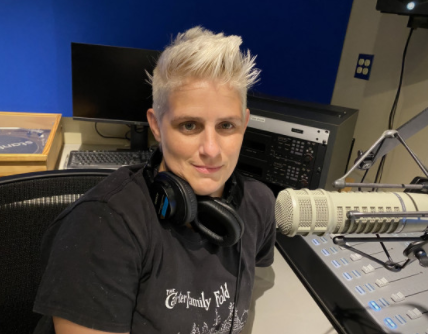 The Emory & Henry College radio station, 90.7 WEHC, hired new General Manager Ivy Sheppard during the initial COVID-19 shutdown in March, 2020. Now that E&H has mostly returned to campus life in a “new normal,” Sheppard is prepared to equip her unique expertise of Appalachian music, culture, and history in her new position.

After spending 20 years touring and playing old-time string band music, she considers playing the music and honoring the traditions of the Appalachian Mountains – particularly in Southwest Virginia and East Tennessee – her life’s work. This love of music transitioned into her first radio job in her hometown of Mount Airy, North Carolina.

“A friend invited me to be on his show,” Sheppard said. “He never came back, and I never left. Suddenly it wasn’t just a stage that I could stand on sharing my love of the music, but anyone, anywhere in the world could listen in.”

“WEHC is a beacon in Southwest Virginia,” Sheppard said. “The station already does so much and has even more potential.”

Part of that potential comes from the lineup of events and programs slated for this year. The first of those comes from the Van Vlissingen Center for Career and Professional Development in the form of “Ready, Set, Go!”, a segment dedicated to career preparedness. Another upcoming segment is “Immigrant in America,” organized by geography seminar students under the instruction of Dr. Edward Davis that will examine the struggles associated with immigration through story, poem, and song.

These two segments will air on alternating Monday evenings at 6:30 p.m. Additionally, the station will premiere a live music segment highlighting the musical history of Southwest Virginia later this spring.

Sheppard noted that these accomplishments and advancements were not achieved alone.

“I’ve recently been joined by Programming Assistant Leigh Anne Hunter, and together we aim to make WEHC the frequency every radio in the region is tuned to,” Sheppard said. “We have such a unique opportunity to get out in the community to share and collect ideas, values, music, all the things that tie us together and make us unique.”

Sheppard also recognizes the importance of WEHC being located on a college campus, which will lead to some unique programming efforts later on.

“We are cultivating the relationship that already existed with the Mass Communications department to further engage students in working and learning at WEHC,” Sheppard explained.

“Not only does this relationship give us access to students interested in all manner of media, but it offers them the opportunity to gain professional experience while helping to improve the quality of production at the station, as well.”

When she is not working in the station, she can be found scavenging through junk stores and estate sales for old records, which can be heard by tuning into WEHC on Sunday evenings from 6-8 p.m.

In the future, Sheppard looks forward to being part of what she considers a vibrant music scene at E&H and its surrounding community.