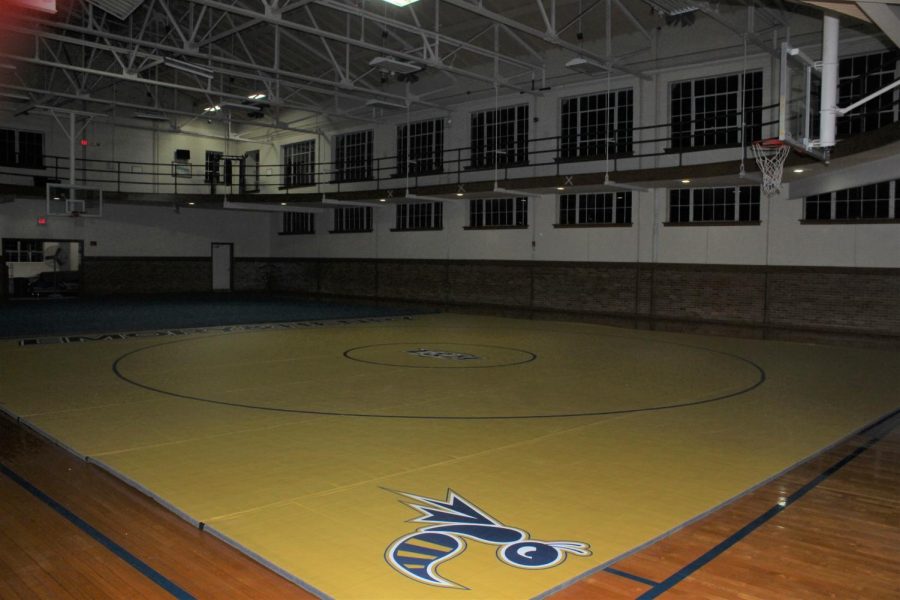 The second floor of Martin Brock, above the Hut, has been renovated into a practice area for the new wrestling team. On the far side of the gym, wrestling mats can be seen.

In early January of this year, Emory & Henry College announced the addition of a mens and womens wrestling program to its list of 22 NCAA Division III affiliated teams. Since then, the team has hired a complete coaching staff headed by coach Pete Hansen, created a facility in the top two floors of Martin Brock, and compiled a roster of 14 men and one woman.

Coach Hansen was named official head coach in February and started his recruiting process on campus. E&H junior Donovon Pinnix was one of the first few interested in the start of the new program.

Pinnix will soon begin his first year as a part of the wrestling team. In high school, he went to the State Championship three of his four years. Pinnix, already a member of the track and football team, decided to continue his wrestling career at the collegiate level.

“Coach Hansen was my defensive-line coach for football,” said Pinnix. “He told me there was going to be a wrestling team, I told him about my career in high school and he told me to come out, so I’m looking forward to a good time.”

In mid May, the construction of the new wrestling facility was underway. The second floor of Martin Brock has been renovated to include the men’s locker room and the practice facility, while the third floor holds the women’s locker room and coaches offices. Two blue and gold wrestling mats were added as the finishing touches to the wrestling teams’ new home.

Coach Hansen plans to promote a Blue Collar, Gold Standard mentality on the team. In an interview with Brent Treash earlier this year, coach Hansen said, “When we go out as a team we want to be blue collar and put in the work to achieve our goals, but to realize once we get there we can’t stop so we have to be the gold standard.”

Currently, E&H is only one of the few teams in the Old Dominion Athletic Conference to add wrestling to their list of sports. Ferrum is the only other school in the ODAC with both mens and womens wrestling teams, as Washington and Lee only has a mens team. However, both Roanoke and Shenandoah have revealed they will be starting programs in 2021.

Like the rest of the fall and winter sports at E&H, the wrestling season has been moved to the spring of 2021. “We have to start small so we are going to start against club teams,” said Pinnix. “Since a few other schools in the ODAC have a team I believe we will compete against them as well.”

The Emory & Henry wrestling team has officially been allowed back on the mats after the school cancelled all athletic activities through October 27 due to an outbreak of coronavirus cases. Safety precautions are in place to ensure that the athletes stay healthy and are able to compete in the spring.